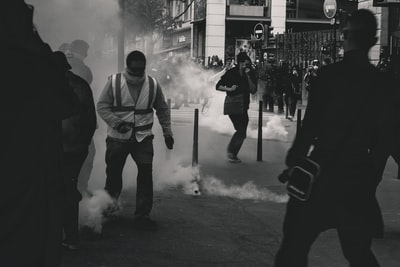 The New Paradigm of Organized Violence, The Left to Right-Wing Shift

As the US presidential elections draw near, rhetoric on both sides of the political spectrum has become increasingly divisive and inflammatory. The fact that the results of this election cycle carry consequences far beyond the borders of the US has encouraged many international figures to chime in, and in some cases fan the flames.

A New Paradigm –Violence From a Variety of Actors in the US.

In Portland, Oregon, rioters have taken over several city blocks for weeks, blocking EMTs from entering and tending to civilians in distress. In Washington DC, a belligerent crowd accosted elderly attendees of the Republican National Convention as they made their way to their hotels, and in Kenosha, Wisconsin, days of looting and vandalism culminated in Kyle Rittenhouse, a seventeen-year-old, opening fire in self-defense, injuring one of his assailants, and killing two others.

If we were to judge by legacy media reports, the first incident was a peaceful protest speaking truth to the racist Trump regime, the second incident did not occur, and the last incident was a case of a mass shooting of peaceful BLM protestors, perpetrated by a white supremacist.

The fact of the matter is that the take-over in Portland caused an enormous amount of damage to property, and claimed the life of Lorenzo Anderson, a seventeen-year-old African-American teen, whose family are taking the democratic city leadership to court for dereliction of their duty to protect and serve their constituents. The DC mob demanded Senator Rand Paul “Say her name”, referring to Breonna Taylor who police shot dead during a “no-knock” raid of her residence. The misinformed mob was likely unaware that Sen. Paul authored a bill named after Taylor, to end the “no-knock” practice. Finally, all of the men Kyle Rittenhouse, the young man dubbed by the mainstream media a “white supremacist”, shot in self-defense in Kenosha, were white.

Media’s Control of the Narrative

This kind of narrative control and manipulation is nothing new, as trust in legacy media plummets, along with their ratings. Obfuscating the truth, spinning facts according to an ideology, and analyses mired by partisan self-interest surprise very few readers and viewers when the source is mainstream media, however, when academia, and worst of all, the intelligence community, engage in this kind of behavior, it certainly comes as a shock to most.

Recently, many acclaimed scholars, respected think tanks, and veteran counter-terrorism professionals have been parroting the aforementioned media narrative, specifically when it comes to what they assert to be the biggest security challenge the US will face in the near future. Alarmingly, the input given by the vast majority of those we entrust with our safety, and those we consider experts on these matters, sounds more like an ideologically biased position, rather than an impartial conclusion, reached by examining facts.

Earlier in 2020, Nicholas Rasmussen, former Director of the National Counterterrorism Center (NCTC), gave a keynote speech for Georgetown’s center for security studies, during which he named right-wing extremism as the most pressing issue for the US’s domestic security. Rasmussen, much like very many others who support this claim, cite the SPLC and ADL’s surveys and research as supporting evidence. A review of the SPLC and ADL’s methodology, and of their definitions of right-wing extremism reveal several problems that should call into question the veracity of their findings, and by extension, the assertion made by Mr. Rasmussen and others.

A Bias Supported by the Left-Wing Academia

From a methodological standpoint, the SPLC and ADL’s claims of a rise in anti-Semitic, white supremacist, or similar incidents is based on self-reported surveys, containing many questions about respondents’ subjective assessment of incidents. To put it simply, the only evidence of an incident being racially motivated, for example, is the alleged victim’s perception of the incident, rather than any kind of factual evidence.

What further casts aspersions about these sources’ legitimacy is the fact that their definitions of what constitutes hateful, far-right ideology is so broad, that almost any critical utterance falls into it. To illustrate, under the SPLC and ADL’s definition of “Islamophobia”, a contentious concept, to begin with, critics of radical Islam, such as ACT for America’s founder, Bridget Gabriel, are labeled “Islamophobes”, and are then added to the hate speech statistics. The SPLC and ADL label Gabriel as such, despite her having escaped anti-Christian Islamic violence in Lebanon, when she and her family became refugees, during the thirteen years long Lebanese civil war, and having first-hand experience with the consequences of radical Islam, hardly a “Phobia”.

The Concerted ‘Demonization’ of the Traditional Right

Essentially, conservative and nationalistic positions are maligned, and voices critical of progressivism and globalization are vilified, as all of the above are painted as hateful ideologies by the SPLC and ADL’s publications. This ever-expanding definition marginalizes any position that is slightly right of the progressive left ideology.

If the SPLC and ADL’s definition would not travel beyond their walls, it would not matter; however, as mentioned above, counter-terrorism practitioners and scholars are accepting this faulty scholarship as factual and are formulating policy in accordance with it. What is much more disturbing is the fact that this has become the accepted narrative, and it is being reinforced in a feedback loop.

Counter-terrorism practitioners and scholars have been focusing on groups like “the proud boys”, a multi-ethnic self-proclaimed western chauvinist group, labeling them part of the rise in white supremacy in the US, with no supporting evidence, and an abundance of evidence to the contrary. In addition, movements like “the Boogaloo boys”, an anti-government militant group, have also been deemed part of the looming xenophobic, racist, far-right danger, regardless of the fact that many of their members are minorities. This movement is comprised of unaffiliated groups, tethered only by their extremely libertarian ideology, and it has no central command, or any semblance of hierarchy.

The reason this is important is that the same CT practitioners and scholars who are quick to warn the public about the aforementioned groups’ radicalization potential, and the likelihood they will morph into domestic terrorist organizations, do not hold left-wing violent groups to the same standards they hold the so-called right-wing extremists.

Although Antifa members have been implicated in the incidents described earlier in Portland, DC, and Kenosha, CT experts insist they are unorganized, lack leadership, and do not have a structure resembling an insurgency or terrorist organization. This assertion flies in the face of reports made by journalists such as Andy Ngo, who uncovered communications between various Antifa cells, organizing their members and setting up training camps. Moreover, CT experts who skillfully modeled AQ’s financing apparatus, and disrupted Hezbollah’s criminal funding sources, seem to be blind when faced with funding campaigns dedicated to bussing Antifa agitators across the US, legal fees of arrested Antifa rioters, etc. These organized, directed entities, all of whom operating under the same banner openly call for violent revolution, with some even chanting “death to America”. All of these activities clearly fall under the US’s definition of terrorism, but while this is taking place in real-time, so-called experts are more concerned with potential violence coming from the right sometime in the future.

One would hope that the obvious use of violence for political gains we are witnessing today would attract the appropriate attention of responsible CT experts, and they will put an end to it.

Interested in sharing your ideas with us? Go on and read this short article

A Renewed Need For Real Unbias Access to Information and Citizen Communication
When Conspiracy Theories Aren't Conspiracy At All - A COVID Story
Is Social Media the New Holy Grail of Authoritarianism?

Published in The Controversial